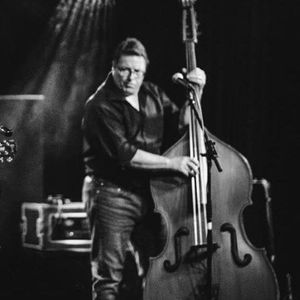 Jerry Abrams, A Band Of Brothers on Bass

Jerry Abrams’ connection to the Texas music scene goes back as early as his arrival in the Lone Star State at age 14. A classical guitarist by training, he found his niche playing bass – upright and downright. He is also a talented harmonica player and sings harmony vocals. Abrams has lent his artistry to countless up-and-coming bands in country music, playing western swing, jump blues, Americana, top 40, and bluegrass.

This versatile performer was born in Louisville, Kentucky – the Bluegrass State. By the time he turned 16, he was playing clubs and dances around the Fort Worth area. It wasn’t long before he began recording, doing studio sessions and traveling the country. To date, Abrams has toured the U.S., Canada, Mexico and Western Europe. He has also done commercials, radio and TV specials, a few international PBS specials and a motion picture soundtrack, (Paradise Texas, released in 2007).

Abrams is well-respected in the Texas music community and there aren’t many touring bands around without at least one musician who has performed with him. His charm and positive, easygoing stage presence have earned him the nickname “Smilin’ Jerry” by many performers and on numerous album acknowledgments.

Abrams’ passion for the creative process makes him a natural fit for performing and recording with songwriters, including appearing on an album featuring Willie Nelson. Although his forte has always leaned toward roots country, he has also played with many Dallas and Fort Worth blues greats throughout his career. He has always loved the unmistakable sound of the “Fort Worth shuffle,” and has enjoyed playing numerous western swing gigs with the likes of Snuffy Elmore, The Rueffer Brothers and Tom Morrell. In the late 1990’s, he toured with Ed Burleson during his tenure with Warner Chapel Records, while he was under Doug Sahm’s management and Clay Blaker’s guidance/production. It was during that time that Abrams met and befriended Jim Lauderdale, with whom he has enjoyed playing many shows since. Abrams has also performed with David Ball, Johnny Bush, Augie Meyers, Rusty Weir, Bobby Crown, Ponte Bone and many more. Music fans may remember him touring with other popular Texas artists such as Tommy Alverson (alongside drummer Rockin’ Ron Thompson) and Houston Marchman.

Abrams was honored as a Texas Tornado among Buddy Magazine's 2017 bass inductees. This distinguishes him as one of the top players in the state of Texas and places him on a list with great talents such as Billy Gibbons, Doug Sahm, Stevie Ray Vaughan, Dusty Hill, Chuck Rainey and many others.